In some countries, the child welfare parent advocacy movement has begun to gain a foothold, and child welfare systems, politicians and funders have recognized the important role parent advocates can play in improving outcomes for families. Still, too often parent advocacy is treated as a nice addition rather than an essential service — meaning that staffing remains small and programs and positions are cut when funding is tight.

While proving effectiveness through research can be challenging for parent advocates working on a shoestring budget, some parent advocacy organizations partnered with academics and think-tanks to evaluate their impact. Some of those findings, highlighted in this section of the toolkit, can help make the case for the critical need for parent advocacy efforts worldwide.

Often research started small, with in-house efforts to document impact and through partnerships with academics and graduate students working pro bono — steps that many parent advocacy efforts, even small ones, might still be able to take.

It is important for parent advocate programs to consider how to implement some form of evaluation to continue to strengthen their work and to document their impact. For example, this can take the form of tracking numbers of parents served and how parents feel about the help they received from advocates. In this section, you will find sample reports that may provide ideas for how to self evalutate and document the impact of your work.

In Washington State, research on The Children’s Home Society of Washington’s Parents for Parents program helped advocates make the case for legislation that is set to expand the program to 20 sites statewide. (We will be statewide in all WA countries by June2021.)

The program started in Pierce County, Washington, in 2005, and offered system-involved parents a Dependency 101 class to help them understand the basics of child welfare and how to advocate for themselves. The Spokane program has since expanded, and now offers 8-9 classes a month, phone mentoring, parent advocate attendance at initial court hearings and support before and after other hearings.

While parent advocates could see that they were having an impact, the research helped them prove it. It found that 70% of parents who participated in a Dependency 101 class reunified with their children, compared to 53% of parents who did not. For parents who attended Dependency 101 and received additional peer mentoring, reunification rates increased to 79%.

“There are also all kinds of private sources that only fund evidence-based practices,” added Ambrosia Eberhardt, child welfare-affected parent and program manager of the Parents for Parents program in Spokane, Washington.

Initially, Parents for Parents documented their impact with a simple survey that asked parents to report how knowledgeable about the system and engaged in their case plan they felt before and after they attended Dependency 101. The program was evaluated by the National Council of Juvenile and Family Court Judges in 2011 and 2013 which resulted in P4P gaining Promising Practice status by the University of Washington's Evidence-Based Practice Institute. Based on the most recent evaluation conducted by the University of Nevada and the Capacity Building Center for Courts, the program hopes to apply to a national clearinghouse in order to continue to move the program further along the evidence-based continuum. 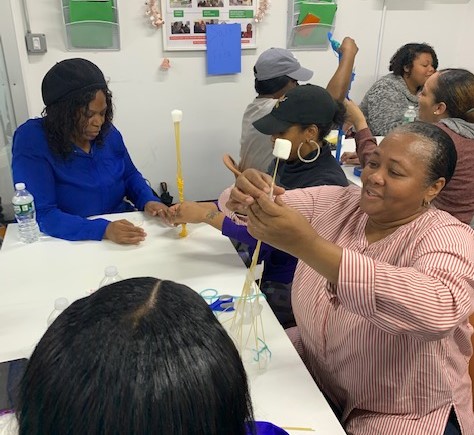 Research That Reflects the Concerns of Affected Families, England

Family Rights Group was founded in 1974 by lawyers, social workers and academics in England to change how families are treated when they become involved with social services and to support families to keep their children. The organization provides advice to families through a confidential telephone and online service; advocates for parents and kin who are going through child protection; and works to influence laws and practice to ensure that families’ rights are respected.

In 2014 Family Rights Group established Your Family, Your Voice, an alliance of families, practitioners and academics. Among their projects are academic papers focused on topics that families define as pressing areas of concern and which capture the voices of families. Academics do their research under the oversight of a Parent Advisory Panel, which offers guidance on how to develop respectful, effective methods of learning from families. Your Family, Your Voice has used these research papers to center the experiences of families in reforming child protection, care and related systems.

Read their most recent paper about families’ experience with the child welfare system, “Stepping Up, Stepping Down,” which they have used to advocate for parents to have a greater voice and role in determining the progress of their own cases.

Parent advocates from FISH provided support and advice to researchers from the University of Newcastle and the nonprofit Life Without Barriers to produce research that highlights the difficulties parents experience when children are removed and placed in foster care.

Using Research to Expand the Role of Parent Advocates, The United States

Parent advocates have become central players in New York City’s Initial Child Safety Conferences, critical meetings when parents and child welfare officials come together to decide whether children will be placed in stranger or kinship foster care, or whether they can agree on a safety plan that would avoid removal. Parent advocates provide parents with support and information during this high-pressured meeting.

The Administration’s Office of Advocacy used initial research on the positive impact of parent advocates in Initial Child Safety Conferences to launch a pilot project and evaluation to expand that role and provide ongoing parent advocacy support during an investigation.

In the United States, teams of lawyers, social workers and parent advocates have shown far better rates of reunification and overall reduced stays for children in foster care. This teamwork, also known as the Cornerstone Model, has been studied extensively in a number of states.

Below is a summary of the model and the research on it:

Research Shows the Need for New Ways to Protect Children and Support Families:

Research can be used by advocates to show the harm of the child welfare system and to push for societal changes that would keep children safe while strengthening families and communities. Here you can find several research studies that may be useful tools for advocacy efforts.

Research for Organizing: A Toolkit for Participatory Action Research from Take Root Justice
This toolkit is designed for organizations and individuals that want to use participatory action research (PAR) to support their work towards social justice. PAR helps us to analyze and document the problems that we see in our communities; allows us to generate data and evidence that strengthens our social justice work and ensures that we are the experts about the issues that face our communities.