It’s often a decision that parent advocates make not once but again and again, as child welfare administrations change, and as parent advocacy organizations evaluate how to have the greatest positive impact for families.

In this section you’ll find examples of advocates and activists that have created practice change by working collaboratively, often while continuing to call for larger system reforms and societal changes. 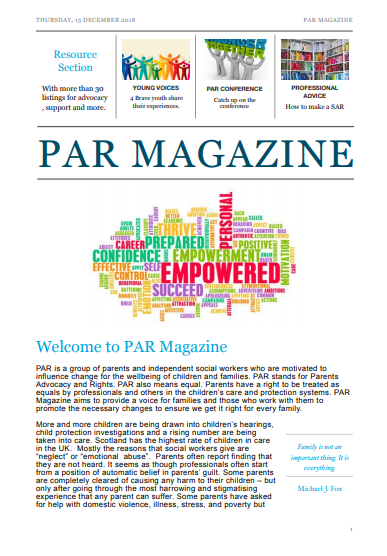 "Where children are safe in their families and feel loved they must stay — and families must be given support together to nurture that love and overcome the difficulties which get in the way."

In 2017, Scotland began a three-year independent review of its child welfare system, hearing from all parties impacted by child welfare. PAR invited the review’s chairwoman to attend the first ever PAR conference. After the conference, the review regularly met with PAR parents and families, who advocated for investment in and support for children’s families of origin. The relationships that were built over the course of those meetings had a profound impact on the review’s final reports, which concluded:

Where children are safe in their families and feel loved they must stay — and families must be given support together to nurture that love and overcome the difficulties which get in the way.

Scotland must listen to and absorb the overwhelming evidence of the lasting pain that removal has caused children, families and communities. This must result in a fundamental shift of thinking about when a child should be removed from their family. 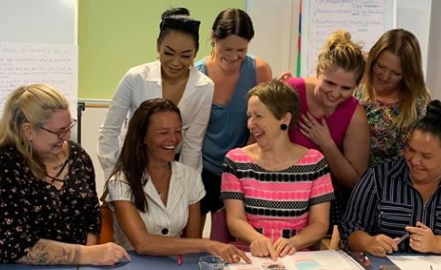 Family Inclusion Network South East Queensland and the Queensland Parent Advisory Committee meet with the Minister of Child Safety, Youth and Women for the first time

In Australia, the rate of out-of-home placement for Aboriginal and Torres Strait Islander children is ten times higher than that for non-Indigenous children.

In 2004, the first branch of Australia’s Family Inclusion Network was established in Western Australia to improve outcomes for children in care by advocating for greater involvement of and greater respect for their parents, families and communities. Today, FIN branches exist in many areas of Australia.

From the beginning, FIN advocated for parents to help set child welfare policy and practice. In 2018, nearly 15 years after 'Family Inclusion Networks' FIN began to form independently in pockets around Australia, parents and the Family Inclusion Network of South East Queensland (FIN SEQ) met with the Minister for Child Safety in Queensland, Australia, and asked her directly to support the establishment of a formal Parent Advisory Committee to advise the agency's work. The Minister agreed that parents should be at the decision-making table and the first Queensland Parent Advisory Committee (QPAC) was endorsed in December 2019 by the Minister for Child Safety in Queensland.

Here, FIN SEQ gives a step-by-step overview of how they created the committee. In this document, Shared Strength: Parents Taking their Place at the Table, you’ll find information about the parent forums FIN SEQ ran in order to gather feedback and set the advisory committee’s priorities.

Rise TIPS on Visiting and Service Planning offer guidance by and for parents in two critical and often very challenging areas of a family’s case. At the conception of the TIPS project, Rise recognized that it would be able to reach far more parents by having staff at foster care agencies give the TIPS to parents. Rise also believed that if foster care staff embraced the TIPS as helpful to their practice and didn’t see them as just another mandate, the TIPS could help case planners build trust with parents and better understand parents’ needs and challenges.

In order to increase buy-in and to ensure that frontline staff truly saw the TIPS as useful, Rise worked with frontline staff at three New York City foster care agencies who provided ongoing feedback. The ideas from those meetings helped fine tune the TIPS handouts. They also led to the development of a training video and newsletter for foster care staff and to the creation of an implementation guide that lays out what the agencies and Rise together found effective. It includes planning, training and evaluation resources so that other agencies can bring the TIPS approach into frontline practice.

Rise has since trained case planners, visit coaches and parent advocates at 7 foster care agencies to use the Visiting TIPS.

Tips for Supporting Parents in Supervised Visits from Rise Magazine

BPNN is a national network of hundreds of parents and organizations working together to strengthen families, communities and systems by engaging the voices of parents across the United States. Learn how parents, organizations and individual stakeholders can join BPNN.

The Children’s Trust Fund Alliance offers customized technical assistance (TA) that addresses the developmental needs of organizations who wish to be more effective at partnering with parents in their work. This can vary in scope – from recommending excellent parent speakers to designing a plan for creating a Parent Advisory Group or Council.

Visit the Children’s Trust Fund Alliance website to access resources for changing practice that were developed by parents and partners:

Professionals who are beginning to seek involvement and feedback from impacted parents and youth can use this handout to choose more meaningful methods for learning about valuable new perspectives and building the power of constituents in policymaking and decision-making. This handout can be a resource for reflection and may be used as a discussion tool to increase transparency. This handout can also help organizations led by or serving impacted parents and youth to negotiate for meaningful inclusion in which you are valued as partners.